Dealing with a clingy boyfriend can become quite taxing and annoying when nothing seems to be working out. In fact, after being through so much, it usually comes to a point when you don't even want to be with that person anymore, irrespective of the fact that he "might" change in the future. If you seem to be sailing in this boat, this LoveBondings post comes to your rescue, by presenting 7 effective tips to get rid of a clingy boyfriend. 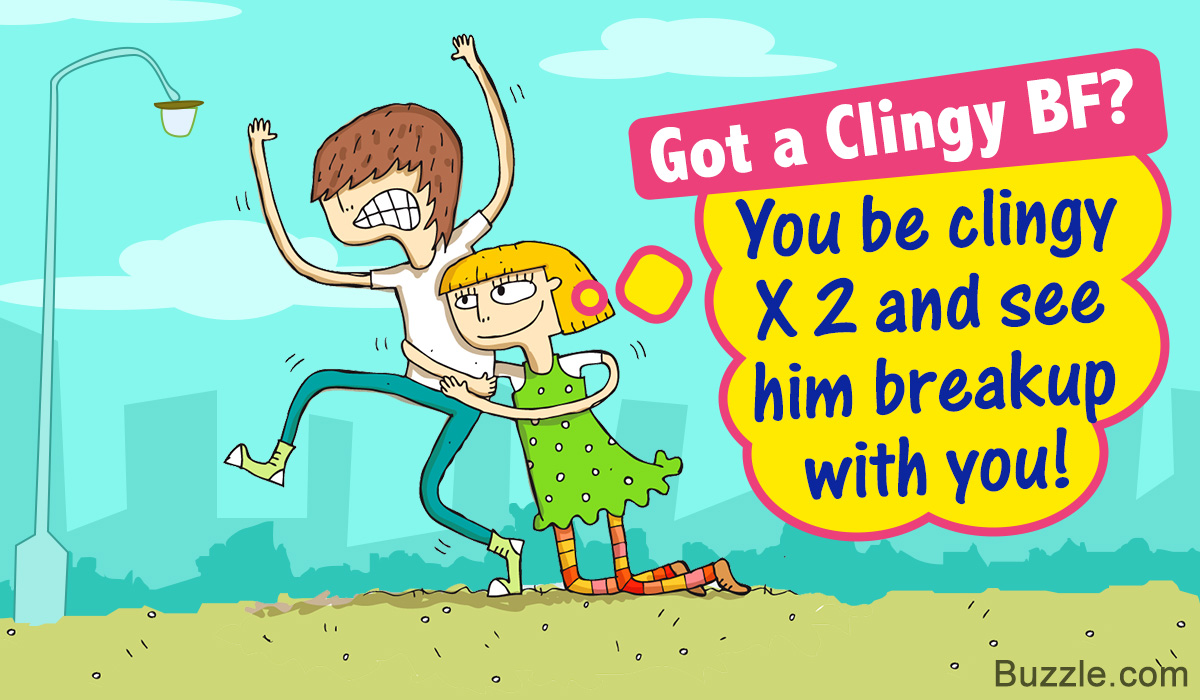 Dealing with a clingy boyfriend can become quite taxing and annoying when nothing seems to be working out. In fact, after being through so much, it usually comes to a point when you don’t even want to be with that person anymore, irrespective of the fact that he "might" change in the future. If you seem to be sailing in this boat, this LoveBondings post comes to your rescue, by presenting 7 effective tips to get rid of a clingy boyfriend.

No, You’re NOT Being Mean!

First off, free yourself from the guilt that you’re being mean when you think of getting rid of your clingy (ex) love. Girl, clearly there is no happiness in this relationship for you, and if you’re not happy, how would he? If your heart tells you that there’s nothing left in this union, listen to it; there is nothing to revive out of this clingy mess!

No one is absolutely perfect and you both need to invest a little time and adjustments to make things customized for the both of you. Having said that, we assume that you have tried various ways and tactics to make him understand that being clingy ain’t a turn-on for you. The thing with clingy partners is that they seem absolutely P.E.R.F.E.C.T. in the beginning. Their kind and thoughtful gestures instantly sweep you off your feet, and when you see all of this in a guy, OMG, you see your Prince Charming right there! Only, time tells you that he is rather, a clingy, say-that-you-love-me-all-the-time kinda prince (un)charming!

Our first and foremost advice in this case is to try to make things work. Although, in most cases, it is unlikely that his possessiveness and insecurity will come to an end, but give it your best to see if your case falls among the category of those rare few. If you feel that all the possible ways to deal with your boyfriend’s clingy nature have exhausted, the following section will give you the necessary advice on bringing this to a peaceful end.

Ways to Get a Clingy Boyfriend to Breakup with You

The last line would have made you frown, right? We mean, how is it possible to end it all peacefully when this guy just wouldn’t stop stalking you? There is only one way―you have to make him dump you. As insensitive as it may sound, understand that this is the only thing that will save you from the post-breakup drama from his end.

If this guy is clingy, he has the potential to be devastated if you leave him, and yes, don’t be surprised if he ends up doing something stupid, like turning into this psycho ex-lover whose motto in life is to get you back at any cost. We don’t have the strength or the time to deal with all that, do we? You’ve already been through enough of his tantrums―constant calls to know where you are, asking how much you love him 10 times a day, being super upset if you fail to reply to his normal “hi message” asap …! To the others, all this may sound quite unworthy of being upset about, but for those who know what we’re talking about, you really need a break, or rather a breakup! Here’s a list of tips that many girls have tried, and have been successful in their endeavor.

We highly recommend this way for two reasons: (1) He gets to taste his own medicine, but worse; (2) You give him what he asked for, and get what you want too―a breakup! The reason he is making your life miserable is because you seek space, so now, give him none. Increase the degree of clingy to as much as you can. If he calls you 10 times, you call him 20 times, especially when you know he’ll be busy. Ask him to sing you a song, especially when he’s stuck in a formal situation. Ask him to write you a 100 reasons why he loves you every day, each day a new one. If someone calls him in front of you, ask him to put the call on speaker and talk; after all, you’re his girlfriend and you “love” him, so it’s your right. Bottom line is that you need to cling on to every minute of his life, unless he begs you to leave him alone!

We hate to say this, but to make yourself appear repulsive in his eyes, you must get annoyed and pick up fights at any opportunity you find.

For instance, if he repeats two or three among the 100 reasons why he loves you, start your act. Expect too much from him, remind him everyday of the things you want him to do for you, but give him nothing in return. Remember, the whole point here is to make yourself repulsive, and create doubts in his mind regarding your compatibility with him and his life. On a personal note, guys absolutely loath females who fight and argue … well, most of them!

If you can’t really keep up the act of being super clingy, and if that is not something you imagine yourself doing, then an alternative for you would be to do just the opposite. Be very indifferent and speak to the point. Let him feel that you’re not the same warm, bubbly, happy, cheerful girl that he fell for.

And to make it more evident that things are not the same, ensure that you never ever initiate any conversation. The point here is to make him feel that he’s the only one who is interested in being with you―which anyway is the case! There might be fights, suspicion that you have someone else in your life, but clarify all his doubts and put forth clearly that it is only because of him and nothing else.

Another unkind thing to do, but it must be done. Just avoid him, as simple as that! And if he ends up in front of you asking for clarification, just tell him that you were busy, or put it bluntly on his face―”you just don’t feel like talking to him, you don’t feel the connection anymore.”

Be honest and tell him that his clingy behavior has sucked out the love you had for him in your heart, and now there’s nothing, nothing at all! And because you’ve done everything possible under the planet to make him understand, yet he fails to correct his behavior, you don’t see any point in communicating your differences with him, rather communicating with him at all!

Make Him Wait for Long Hours

Waiting is something that is completely anti-men, they hate it! If you have dinner plans and you know he’ll be waiting at the restaurant, make him wait for quite a long time. If he comes to your door to pick you up, tell him you’ll be down in 5 and take an hour instead. The motive is to make him believe that you have no respect for his time and commitment, and you give a damn about being late or early. Again, there might be arguments, but then they will serve in your favor, eventually!

Take His Focus Off You!

Keep him busy in something (or someone) else. If you can manage to do this, this option is perfect! We know this isn’t a nice thing to say, but if you can pair him up with someone who can take his behavior, then do so.

This will keep you away from guilt and also help this guy find peace and happiness. In fact, it has been noticed that most men resist in breaking up, even if they know that they are in an unhealthy relationship, due to the fear of being left alone. It is mostly seen that guys (or girls) who tend to be so over-the-top clingy usually seek security from a person. Therefore, there is a possibility that he may leave you alone if he finds a replacement for you. Get him enrolled in some hobby, a course, his work, or another date. Whatever it is, make sure that this replacement takes his focus off you so that if one day you have to tell him that it’s over, it doesn’t leave him highly vulnerable.

Cut Off, Bit by Bit!

You need to cut him off by distancing yourself from his life, slowly and steadily. For instance, if it is your task to wake him up in the morning, or to talk to him every day for an hour, start being inconsistent, and eventually stop it. He will fight, argue, and complain, but eventually he will give in and accept. With a combination of the aforementioned tips, slowly you will make him realize that the two of you are great, but not together.

This is the last of our picks, and from what we have seen, it surely works, provided you have a lot of patience and time.

You must use the aforementioned tips only after trying all possible ways to work things out. We can’t really say which tip will work the best for you; perhaps you’ll have to try more than a few. However, try to end it on a good note, where both of you feel no grudge or animosity against each other. Good luck for a better life ahead, both for you and for him.