Financial Problems in a Marriage and Their Sure-fire Solutions

Financial problems in a marriage is something that almost all couples face at one point or the other. It is better to solve them on time before it gets too late. This piece will give you different scenarios that highlight financial problems and will also tell you how to deal with them. 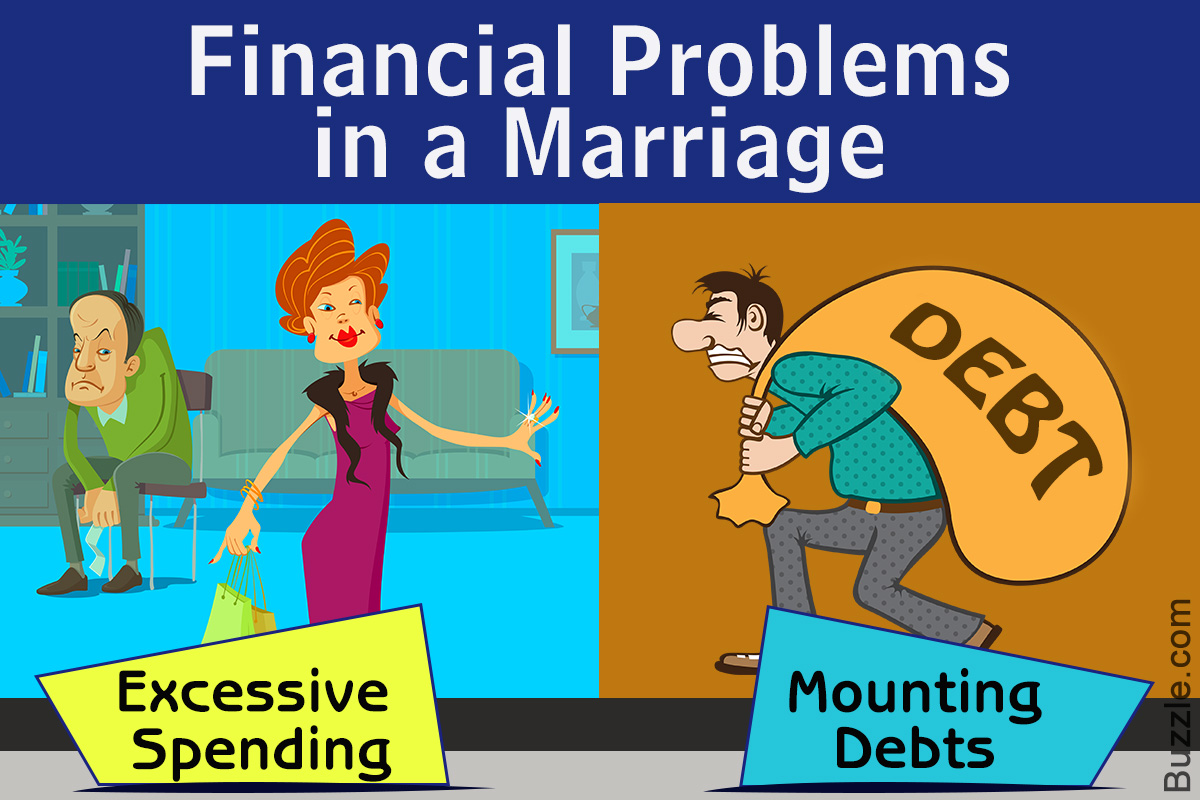 Financial problems in a marriage is something that almost all couples face at one point or the other. It is better to solve them on time before it gets too late. This piece will give you different scenarios that highlight financial problems and will also tell you how to deal with them.

It is said that marriage is the best thing that can happen to two people in love. It is true, provided the spouses understand each other and are aware of the responsibilities that come with marriage. However, married life can suffer a setback, if there are financial issues in a relationship and the partners do not work it out properly to solve these problems. In studies conducted by experts, financial issues have been included as one of the top reasons for a divorce. So, it is always better to be aware of financial problems, if any, and find effective ways to deal with them.

Monetary Issues and Their Solutions

This is one of the basic issues that married couples face. They are not clear about whose salary should be used for household expenses and whose should go in for savings. Lack of planning leads to confusion, ultimately resulting in differences between a couple.

Solution: Couples should try different ways to handle their finances and check which one works the best for them. According to surveys, around 64% of couples have joint accounts, 14% of them have separate accounts, and 18% of couples have both joint as well as separate accounts. There is no particular method to handle finances; it depends on a couple as to how much they want to spend and how much they want to save. So, sit down to decide among yourselves, and make the best call for your future.

Among the various money-related problems affecting a marriage, spending habit is a contentious issue. Many a time, one of the partners is inclined to shop and spend more than the total earnings with the help of loans and credit cards. Mounting bills and high interest rates can really make things difficult for the family.

In certain cases, among the two partners, the wife mostly has the habit of presenting her family with goodies every now and then. The expenditure made, might irritate the other partner and ultimately give rise to arguments.

Solution: Couples should fix a budget for the month and keep a check so that the expenditure does not exceed the limit. As far as possible, use of multiple cards should be avoided. When going through tough financial times, couples need to cut down on entertainment and leisure expenses. Wives and even husbands, if either is into the habit of buying unwanted gifts, should keep away from doing so. This is because, occasional exchange of gifts does not affect, as much as the usual ones do.

Sometimes while making hasty decisions, it might happen that married couples tend to apply for house loans or car loans without figuring out their repayment capacity. Apart from that, some are even in a habit of using credit cards in excess. This negligence in handling money leads to rising debts which becomes difficult to repay in future.

Solution: Taking loans only as per one’s need and repayment capacity, is the first solution to avoid the problem of mounting debts. One should have realistic aspirations and dreams, and think twice before applying for loans and pledging assets with the lenders. And, if both the spouses are working, they should contribute equally to pay off the EMIs.

In order to lead a settled life, couples have to think about their future and secure it. Investment done inappropriately is one of the prime factors to be looked into, especially when you have a family to take care of. For this, couples have to make precise investments and while doing so, they have to be careful as it might be a risky affair.

Solution: Couples should figure out the investment goal and time frame, and make sure to review their investments at least once a year.

Love is blind and people in love know no boundaries when it comes to spending for each other. They tend to buy expensive stuff in order to please their respective partners. This act of unwanted splurging causes problems later on, and couples start blaming each other for mismanagement of money.

An unstable monetary situation arises due to the lack of savings for your future use. An accident, a major illness or an unexpected pink slip, or any other emergency – all situations which require you to dole out a large sum of money – can land you in peril.

Solution: Problems are unavoidable and can never be predicted. So, instead of waiting for the problem to arise, couples should keep themselves prepared for the bad times. They should make sure that they have an emergency savings account. They should plan their monthly savings together along with a target amount to be saved every month, so that they have enough in hand when a sudden need arises.

This is the age where women have caught up with men in every field and are the breadwinners. These days, in many households, we can find women earning more than men which hurts the male ego to a great extent, and if a man is jobless then the situation gets even worse. In such cases, it becomes really difficult to save the relation, as both the partners have their self-pride and none of them is ready to bow down.

Solution: Marriage is a union of two souls and bodies, so couples should treat each other as one. To avoid ego clashes, men should see situations in a broader perspective, and instead of getting offended by their respective wives’ earnings, they should encourage them to work. After all, whoever earns, eventually the income will be utilized for the family.

This is undoubtedly one of the biggest financial problems in a marriage. Many spouses are seen hiding their financial documents, bank account statements and information about their assets, which can be frustrating for the other spouse.

Solution: It is always better to speak the truth, and show all your financial details to your partner. By doing so, your better half would be able to suggest ways of dealing with finances, if need be.

Some Tips for Managing Family Finances

Marriage is a lifetime commitment, so never ignore the petty issues. Financial issues can be resolved easily, so do not waste time crabbing about it. Your family’s betterment and future depends on the same.

Note.- The suggestions given here are just for better understanding of family financial planning. You need to assess your financial situation and take decisions on your own by being responsible for them.