We Decode the Flirting Body Language of Men for You

From the subtle hints to the obvious signs of body language, we decode how men flirt. The cues should help you to tell if he's flirting with you or not. In spite of this, there are always chances of a man's antics seeming confusing. So, go with your gut instinct. This will absolutely work.

From the subtle hints to the obvious signs of body language, we decode how men flirt. The cues should help you to tell if he’s flirting with you or not. In spite of this, there are always chances of a man’s antics seeming confusing. So, go with your gut instinct. This will absolutely work. 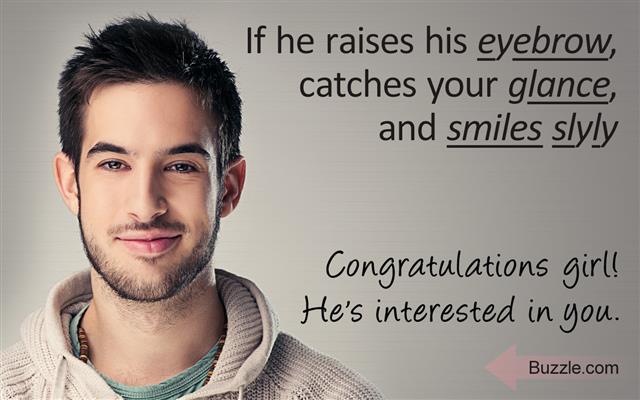 Men, are at times not even aware of the fact that their flirting body language is very obvious to others.

Do you know that, seemingly inconsequential actions can be a sign that he is interested in you, and is subliminally flirting with you. Here’s more…

He’ll most probably always face you whenever you’re together in a group. And when it’s just the two of you, his head will tilt towards you as a way of showing you that he’s paying close attention to you.

Ever heard of something called the ‘eyebrow flash’? When a guy is interested in you, the instant he sees you, his eyebrows go up and down within a fraction of a second. Difficult to spot, but a sure sign that he likes you.

Body Language Of a Person Trying To Flirt

Men are as subtle (NOT) when it comes to sending those secret messages with the eyes as women. When a man is flirting with you, he will look at you intently. He will wait for you to meet his gaze. When you do, if he’s shy he might look away. But if he dares, he will let it linger. This is his way of telling you that he sees you looking at him and wants you to continue. Also, constant glancing at your lips is a sure sign that he is attracted to you.

Now I don’t know how far this is true but a lot of people claim that when a man is around a woman he’s interested in, his nostrils tend to flare. It’s got something to do with being a gesture of openness towards the woman he wishes to court.

When you like someone, their mere thought can make you grin like an idiot. So it’s only natural that when a man sees his woman of interest, he will brighten up and smile that dashing smile of his for her. Not sure if you’ve ever realized this, but there’s always a special smile that everyone reserves for someone they’re interested in. This is the one you’ll get when he’s in flirt-mode!

Male body language is all about flaunting the ‘macho’. So, when he’s flirting, he can’t help but have a little strut. His shoulders and back are straight. His posture is impeccable, so you can see how amazingly fit, healthy, and well-mannered he is.

Another nuance that comes from the need of proving (to you and to the other males around) that HE is the alpha when it comes to you is that his chest will be slightly out when he stands or walks around you. You’ll realize that as he gets comfortable with you, his posture will go from this semi-rigid state to a more relaxed one.

When a guy is attracted to you, physically and emotionally, he’ll want to get close to you to gauge whether you’re comfortable around him. So, he might brush against you (intentionally or unintentionally). He may hold your hand as you cross the road. He’ll hold your elbow or place his hand at the small of your back to guide you through a crowd.

When not touching you, his hands will probably be in his pocket/s or in the loop of his belt. Fidgeting with his hair, brushing off dust from his pants, etc., are all subtle, not necessarily intentional signs of using body language to flirt.

When standing, his legs will be slightly apart. This is another of those machismo-flaunting tactics that men will adopt when they flirt with a woman they like. His sitting posture is something like this: he will sit in such a way that his legs and feet are facing you.