An annulment is the declaration of a marriage as null and void by the court, thus stating that it never existed. Grounds for annulment are the circumstances in accordance with which the court declares a marriage invalid. 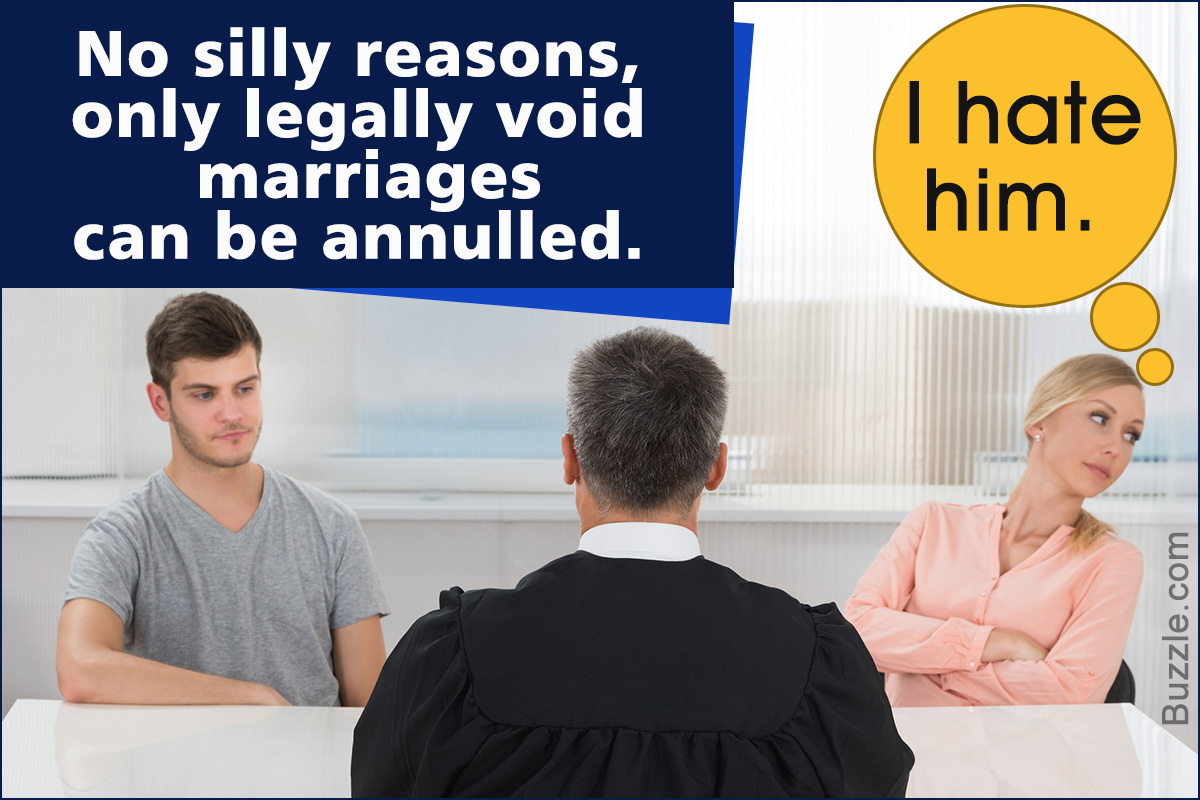 An annulment is the declaration of a marriage as null and void by the court, thus stating that it never existed. Grounds for annulment are the circumstances in accordance with which the court declares a marriage invalid.

When a married couple wish to end their marriage, they have three options before them. What most couples do initially is separate, which means that they are still legally married, but for all practical purposes, separate. The next stage is to get a divorce, which is often a lengthy and painful procedure. Divorce proceedings in many countries are very expensive, which is one of the reasons why couples stay separated for an extended period of time before opting for a divorce. The third option, available to only a few, is annulment. While divorce marks the dissolution of the marriage, annulment declares that the marriage was null and void, and thus never actually existed.

Not all couples are eligible for an annulment. There are a specific set of conditions, any of which can be grounds for an annulment. An annulment will be granted only if one or more of these conditions are clearly and convincing proved in a court of law. The statutes that determine the invalidity of a marital contract are not the same in every state, and they also sometimes differ according to religion.

Factors for Obtaining an Annulment

Those considerations that are more or less common across regions and beliefs are as descried below:

Consanguinity or affinity is one of the grounds for the procedure of annulment. It tells how closely related by blood the man and the woman who want to get married are. It is illegal for a man or a woman to marry a parent, grandparent, sibling, aunt, uncle, or any similar half (step) relation. Irrespective of the intentions or reasons either party had for going through with such a marriage, it is still considered null and void from the start.

The dictionary meaning of bigamy is ‘the act of entering into a marriage with one person while still legally married to another’. Bigamy can be intentional, or it can happen unknowingly, like when a divorce decree for a prior marriage is invalid or not final. As bigamy is a crime, it automatically makes the second marriage void from the onset.

While a marriage where one person is mentally retarded, mentally ill, or otherwise incompetent is not void, the law requires that before a marriage license is issued to anyone who is under the supervision and control of a conservator or guardian, the written consent of that person should be obtained. Such a marriage may be voidable under general legal principles of equity.

Ambiguities in the Marriage Ceremony or License

There are certain requirements that need to be adhered to while obtaining a marriage license, for it to be a legal marriage. If the person performing the marriage ceremony is not legally qualified to do so, or if a catholic couple gets married outside a catholic church, etc., then the marriage is treated as void. These are strong grounds for obtaining an annulment.

A value that stands true for all legal contracts, is that both parties sign it with the intent to assume the contractual obligations. As marriage is also viewed as a contract by the law, it requires that neither party enter it with the intent to deceive the other. An example is of one person entering the marriage with the objective to gain citizenship rights. At the time of seeking an annulment, courts can ascertain either party’s intent by examining the course of events leading up to the marriage and the ceremony itself. For a marriage to be valid, consent of both parties is needed. If only one party consents, or the consent of one party is obtained by fraud, the marriage is considered void. Also, if one person entered the marriage by force, duress, or coercion, it is grounds for annulment.

Concealment/ Misrepresentation of Facts or Circumstances

One of the most commonly raised causes for annulment, is if one person has concealed or misrepresented their health or physical condition. However, it is often held up only if it is a matter essential to the marriage union, such as impotency or inability to consummate the marriage. Other conditions that are considered are ailments that pose a danger to the health of the spouse or offspring. Conditions that are not considered are a person’s chastity prior to the marriage or misrepresentation of a party’s willingness to have children.

If one or both the partners are under the legal age for marriage, and have married without the permission of the court or their parents/ guardians, then the marriage is considered as void. But if the partners have married when under the legal age, and the marriage has lasted after both have crossed the legal marriageable age, then in some cases, it is considered valid, and annulment is refused.

While these are the grounds for a civil annulment, the canon law has its own set of conditions, depending on which it gives annulments. While most are similar, in addition to these, the marriage is considered void if the couple did not get married in a Catholic Church, or either party did not intend to enter into a lifelong, exclusive union, open to reproduction.

Important Things to Keep in Mind

Our society is such, that being a divorcee carries with it a stigma, irrespective of why the marriage failed. In such a case, if there are legitimate grounds for an annulment, a person need not bear the burden of being a divorcee.