Social Media Watch: How to Know if a Guy Likes You Through Facebook

There are many signs that can let you know if someone has a crush on you, or if someone likes you when you see them in person. But what if it's over the internet, or to be more precise, over Facebook? With this social network becoming a common platform for friendships and affairs, it becomes crucial for a girl to know if a guy likes her through Facebook. This LoveBondings article tells you how.

Home / Uncategorized / Social Media Watch: How to Know if a Guy Likes You Through Facebook 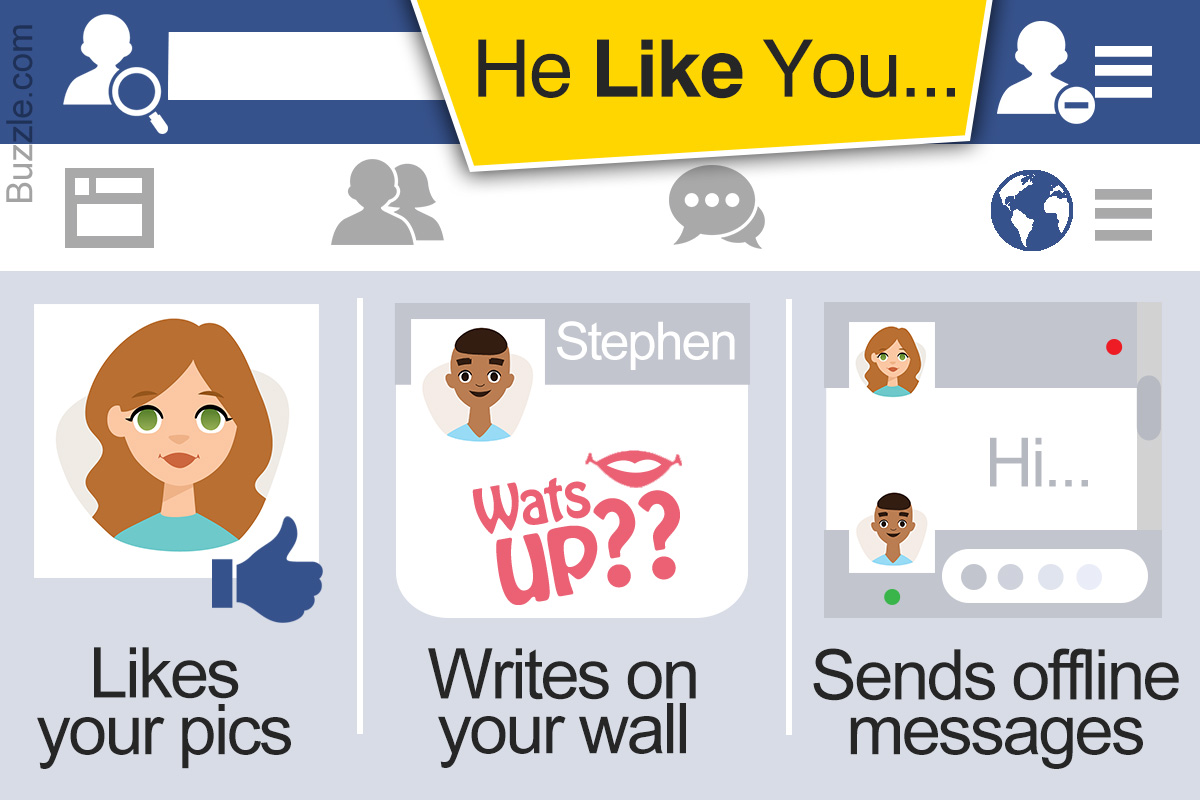 There are many signs that can let you know if someone has a crush on you, or if someone likes you when you see them in person. But what if it’s over the internet, or to be more precise, over Facebook? With this social network becoming a common platform for friendships and affairs, it becomes crucial for a girl to know if a guy likes her through Facebook. This LoveBondings article tells you how.

If the guy is shy, he would not make his actions public, so you can expect getting many private inbox messages, wherein he attempts to start a conversation. While the bold ones may constantly write on your wall, or tag you in their updates.

If you’re an active Facebook user, we really needn’t bother getting into the things that guys tend to do to get your attention. From showy profile pictures to those annoying messages in your inbox asking for your number because they need to say something “important”; it’s very easy to differentiate the genuine guys from the sleazy ones.

Now you would think―why would you add these sleazy guys in the first place? You know, that’s the thing about Facebook. You get a friend request from a guy you knew in middle school, and with time, you find out that he has turned a total cheap nutcase! Or, it might be a good friend from high school, who has now added you and is sweet enough to follow your activities, in a good way. If you think about it, you must pay attention to his personality rather than what he does. This Facebook guy could either be: A shy friend, an acquaintance trying to know you better, or a guy you knew ages ago who has turned into a weirdo-cum-stalker. Depending upon the category, the question to be asked is, do all kinds of ‘likings’ weigh the same? Nonetheless, the following section will tell you what this guy may do on FB to give you the hints.

How to Know if He Likes You: The Things He Would Do

There are a variety of things that he would do which will convey that you are one of the reasons he logs in to this site. He wouldn’t miss a chance to make you notice his presence around, and he will do all it takes to remind you of him. However, before you begin imagining things, know that not all guys are the same. While some may make it obvious to the world by constantly writing on your wall, some would only send private inbox messages, or perhaps, send you messages offline. These and a few more points are discussed in details in the following list.

Likes Your Pictures, Even if They Were Posted Ages Ago!

Though Facebook is easily accessible even through our smartphones, for guys, taking an effort to browse through your old albums and pics, and to actually like or comment on them, definitely says a lot! Okay, say for argument’s sake, maybe he was too bored and randomly went through all your pics. Well, think again, does this seem to be the best thing he could do when bored? Along with constant likes on your pics (not on every single one, as that would seem too desperate), expect some flattering compliments in the comments section.

Tries to Initiate a Conversation Whenever You’re Online

Whenever you go online, he is the first one to initiate a chat, and if you respond to it, he makes sure that the conversation continues ahead. Most guys hate typing too much, and when you ask them the reason for their delayed response, they say that they prefer talking instead. But when this guy is shy and secretly likes you, he will reply to your response instantly.

If this guy is the shy type, there are chances that you would see his ‘hi’, ‘how are you’, ‘how have you been’, and similar messages in your inbox frequently. They might not be anything offensive, perhaps very normal messages, but yes, they will be there, almost all the time.

Likes and Comments on Your Statuses

Is his ‘like’ among the initial ones when you post a new picture or status? Are his comments really sweet and flattering? Does he post extra smileys when you write something funny, even when others find it difficult to gauge your sense of humor? If the answer to these questions is a yes, well, we needn’t say more. There is another thing you must notice. His comments will always be in your favor, and if he doesn’t agree with something you’ve written, he will still like it, maybe not comment on it. But yes, he will do at least something. If you wish, try it and see for yourself.

If You Have Something in Common, Tags You Frequently

Facebook is a good way to know about the likes and interests of others. One look at a person’s profile and you know if you share something common with them or not. If you and this guy happen to share a few similar interest, he might not miss any chance to tag you in his statuses, posts, shares, etc., that are relevant to those interests. For example, if you both are avid fans of the same actor, writer, or player, expect to be tagged in related posts.

Puts Thoughtful Posts On Your Wall

Girls are very expressive when it comes to their moods through constant status updates, well, most of them! For instance, if you write on your wall that you missed the latest episode of Grey’s Anatomy, you see him post a YouTube link for the same. Or, if you post a sad smiley as your status message, you might get a funny picture or video from him. Bottom line: A good guy who genuinely likes you will notice your moods and respond to cheer you up.

Takes Advantage of the ‘Poke Feature’ Every Now and Then

We don’t need to explain this. The line says it all!

Note that, not all guys are the same. There might be a possibility that he might not do any of these things, or may just drop in a comment or two, once in a blue moon. In fact, some guys think that expressing their feelings through the internet is perhaps a little impersonal and insensitive. But you know what―no matter what he does, he will find a way to make you think of him, and in time, make it really obvious. If you like him too, just play along, or else, if he seems to be too creepy, block him; if he seems harmless and you do know him well, just avoid.

Be careful if this guy is someone you have never met in person. Perhaps you ended up adding him because of some online game or something, or maybe because you have many common friends. You really don’t know when this decent-looking guy may turn out to be a psycho freak. So, keep your guard up.