Wondering if you should sign a prenuptial agreement before you tie the knot? Find out about the pros and cons of signing one and what is involved in the process.

Wondering if you should sign a prenuptial agreement before you tie the knot? Find out about the pros and cons of signing one and what is involved in the process. 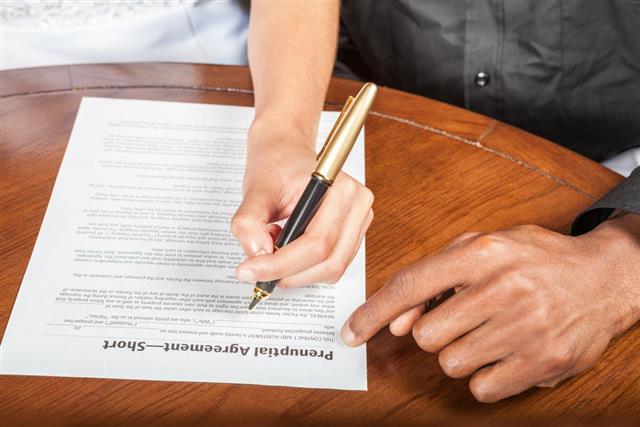 A prenuptial agreement is something most people are aware of before they walk into a marriage. For those who aren’t familiar with what it is, a prenup is a contract where both man and wife agree legally to own part of each one’s property or money before the marriage takes place. The agreed ownership of each one’s property, inheritance, or money is given to the respective person upon the death of either partner or if a divorce or separation comes into the picture. Also known as a premarital agreement, the purpose of signing this contract is to solidify in legal print that the needs of either party are protected should either one fail to stay within the marriage or die later due to an accident or natural cause.

In most cases, it is safe to say that it is necessary to sign a prenup agreement, especially if you have children or grandchildren to think about. Some people come with baggage like a past divorce where they may have children from a previous marriage. To help keep the children and themselves supported, most married couples agree to sign a prenuptial agreement that acts as an insurance policy should the marriage fail to last. You can also sign it post marriage―it is known as a post-nuptial agreement where the married couple sits and discusses in detail about what goes up for ownership by the other and how much each one is entitled to post divorce/separation/death.

This is not an easy subject to broach with someone you are marrying, where lightly treading on this topic will help both partners live comfortably together if they can see eye-to-eye on this matter. A post-nuptial agreement has its share of disadvantages and advantages, where the plus point is that you get to decide what to do about property and money in much the same way as you should a prenup; but, it can hamper with the entitlement of your assets because your spouse will get a good share of it before the rest of it goes to say, your children in the event of a divorce/separation/death.

Protecting your assets in a prenup than a post-nup is advisable. The best time to sign a prenup agreement is at least a month or more before you get married with a detailed discussion on the purpose of doing this and when to do it, so that it is over and done with before the wedding. A prenup is made effective once the marriage has been carried out.

Sometimes both partners are aware of the chances of a failed marriage or possible death and have no issues when it comes to signing one, while others may find it an unnecessary formality. Here’s a copy of a prenuptial agreement sample that you can refer to.

A prenuptial agreement if approached in a matured, logical way can save you a lot of trouble when dealing with an event in the future. Make sure your legal advisers are two separate people who can evaluate the case from two different perspectives. Make sure that whoever is overseeing your contract has full knowledge of family law before you decide to take them on as your lawyer.