Are You in a Relation With an Egoist? Know How to Deal With Them

We have all faced or known someone who put his/her relationship in jeopardy because they never thought of anyone except themselves. Do you have a relationship with an egoist and is it starting to make you feel very unhappy? Well, there are positive ways to deal with any situation, the current one included.

Home / Uncategorized / Are You in a Relation With an Egoist? Know How to Deal With Them 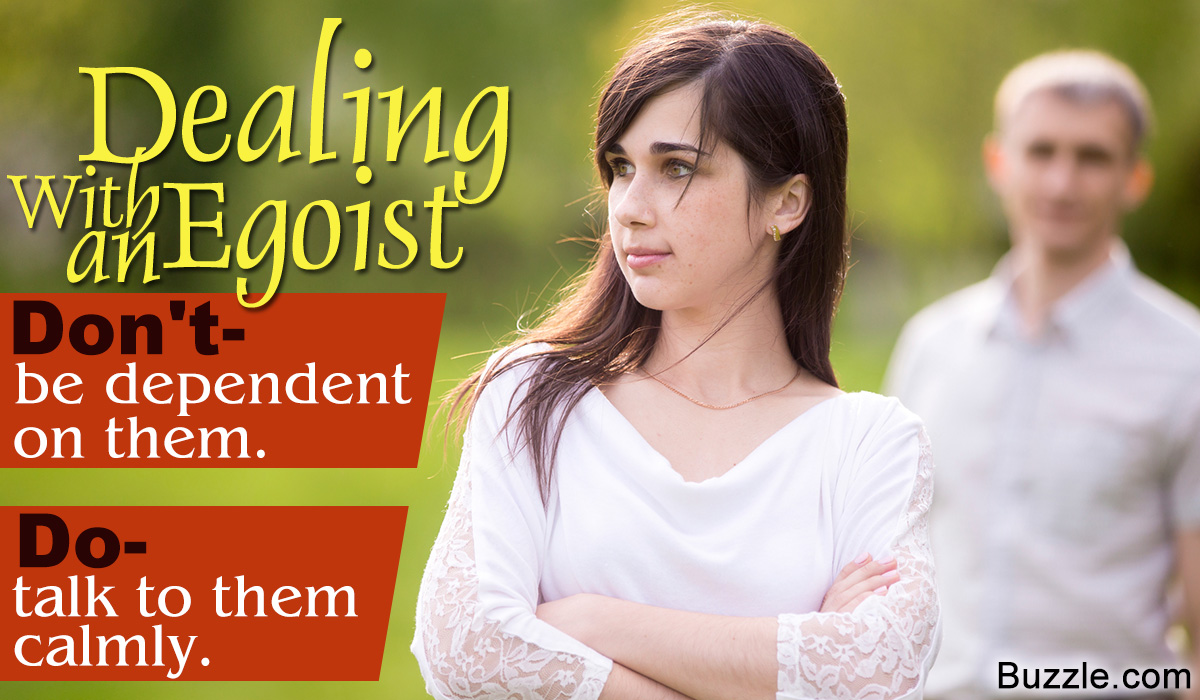 We have all faced or known someone who put his/her relationship in jeopardy because they never thought of anyone except themselves. Do you have a relationship with an egoist and is it starting to make you feel very unhappy? Well, there are positive ways to deal with any situation, the current one included.

Today, we use the term ‘egoist’ to describe a person who is too full of himself or herself. They are very selfish and do not pay heed to any other person’s opinions, wishes or perceptions except those of their own interest. Life can be difficult with such a person at workplace, in your peers or social circle and if you are married to that person or even in love with them, God bless your soul! Is there that person in your life who never agrees with you, is hardly nice to you and has an “I-me-myself” attitude? Well, we all have an ego that needs to be satisfied. Else, we will end up feeling miserable about ourselves. Now, who wants that? But, giving too much attention to your ego automatically classifies you to be an egoist. Those kind of people can be tough to deal with.

How to Deal With an Egoist Husband

Absolutely every egoist loves hearing words of praises about himself. If you don’t flatter him, he will do it himself by appreciating anything and everything about him, even if it were a flaw! Because, in his head, there is no flaw in him. Does he make you feel like crap because according to him you are just not good enough to be with him? Does he often suggest that he is doing a huge favor being with you because no one else would have? I understand exactly which boat you are sailing in. In fact, it could pretty soon share the ill fate of the Titanic. How can you save it? Here is how. Read these tips carefully and practice them!

➦ Stop being dependent on him emotionally or financially.

➦ Do not be clingy at all. This is the worst thing you can do around an egoist.

➦ Spend time with your girlfriends and make plans to go out.

➦ Get a job, that is if it doesn’t create more tension between you two.

➦ If he says something meant to hurt you, instead of screaming or fighting, talk to him calmly like it did not affect you. But, talk to him in the most sarcastic tone with a dash of humor. He will probably try to come back at you but laugh at it like that was the silliest thing you ever heard.

➦ Every time he starts with his self-appreciation routine, engage yourself into something and pretend like you are not listening. If he tries to draw your attention, apologize for not listening and ask him to repeat. If he does, pretend like it did wow you. If he refuses, don’t chide him to. Just smile.

➦ Don’t tell him that you know what he is doing, he will start looking for another ear.

➦ Compliment him out of the blue, when he least expects it. He will die to hear more. Though, never lie or fake it.

➦ If you are going to take all his nonsense, you might as well get the word ‘DOORMAT’ tattooed on your forehead. Try it, life will become a lot easier for him.

Stop trying to hold on to things. Relationships are like sand. The tighter your grip them, the more they will slip out of your control. You need to give each other some space and take time to re-build your self-esteem, self-worth and confidence. Being scared is not going to get you anywhere. Be brave. If you find both of you getting distanced from each other, then, perhaps it is the best to forget about it and move on to live a happy life that you deserve because being with him is getting you no good, sweetheart.

How to Deal With an Egoist Wife

Does your wife have a dominating nature and makes her own decisions without knowing your opinion? Do you feel sidelined around your wife? Of course you do, when all she does is exaggerate each and every quality that she has or does not have! Her attitude may have attracted you towards her during courtship, but, it may have become worse than you could imagine, being married.

➦ When you communicate with her, agree with her point of view.

➦ Do not act weak in front of her just to make her happy.

➦ Be very courteous in your behavior even when provoked.

➦ Remember, argument or submission never got anyone, anywhere. You don’t need to agree with every word she blurts out unless you genuinely think she is right. Make your point if you disagree. Don’t start a fight though and maintain a dignified demeanor.

➦ Start listening to her more. Keep quiet and don’t interrupt her. She will probably go on nagging you to blow off her steam. But, soon she will be calmer when she sees you listening. Try to work out the issues she has with you, not out of an obligation but to work your relationship and make it better.

➦ Understand that she is only looking for some words of appreciation to recognize her efforts.

➦ When she starts tooting her horn, tell her you know how hard she works to do what she is talking about and you think it is absolutely admirable. But, don’t do it every single time or she will say it more.

➦ If all else fails, give your egoist wife a taste of her own medicine.

No matter what, don’t ever let her feel like she can easily put you down. She will lose respect for you. I am not asking you to be a jerk towards her. But, you need her to know that you are not weaker. Is she being an egoist because you are not appreciating her enough? If that’s the case, let her know how special she is, as often as you can. Ultimately, she is human too, not a monster like in your head. Remember Scarlett O’Hara from Gone With the Wind? Exactly.

Is your spouse a hedonist, an egoist or an egotist? Yes, there is a difference between an egoist and egotist. Ego is natural in human behavior. You cannot completely fore-go it. But, to deal with an egoist person, you can start with showing them some respect and acknowledging that you recognize it. Everyone likes to be around people who make them feel good about themselves. Egoists, particularly, have a low self-esteem which they try to keep as hidden as possible and make up for it by having an air of perfection around them even when it’s not real. Perhaps, these tips will help you reduce the tension and make things a lot easier between the two of you.