Wise Advice on How to Be a Good Military Girlfriend

Being a military girlfriend can be a tough job. Many young girls opt to stay away from military relationships for fear of its uncertainties and long distance relations. However, there are good many reasons to stick with your military boyfriend. Here is how you can be a good military girlfriend. 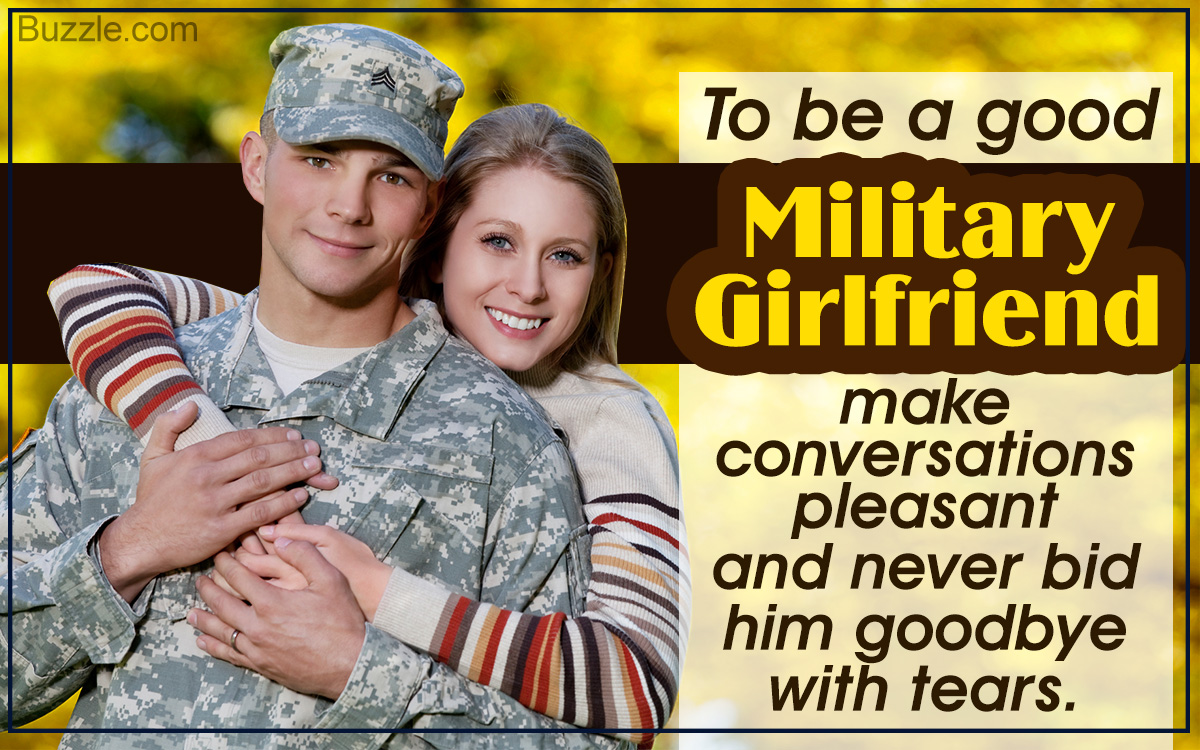 Being a military girlfriend can be a tough job. Many young girls opt to stay away from military relationships for fear of its uncertainties and long distance relations. However, there are good many reasons to stick with your military boyfriend. Here is how you can be a good military girlfriend.

Being a Model Military Girlfriend

Your military boyfriend might be away on his posting for long durations and I am aware that it is really difficult to maintain long distance relationship. However, there needs to be a total commitment from your side when you opt to be a military girlfriend. No matter how hard the temptation is, never ever cheat on your military boyfriend. Most of the time, they are struggling hard on the battle fronts and looking forward to be with you when they are back. It would sound so unfair that he is out on the field, sitting in the sandbox and fighting with the enemy for days, while you silently cheat on him.

Military life is tough and harsh. These officers get a rare chance of free time to call their families and girlfriends. So when you do receive a call, make the conversations as pleasant as possible. Stop complaining about his long term absence. Do you think he is happy to be away from you? Tell him all kinds of pleasant and interesting things that may take away some anxiety from his mind and cheer him up. Also, mention how much you miss him. You might list out to him all the activities that you plan to do when he comes back home. A crucial part is to end the phone calls on a happy note. After all, the ending conversation tends to linger in a person’s mind for a longer time.

If your boyfriend has an access to Internet, then it is a good idea to write him emails as often as you can. Make sure to write about all the interesting things that happened to you throughout the day. That way he will feel as if he is close to you. You may mutually decide to set a letter routine that he might be able to predict. When writing emails, do not mention any unpleasant events or your meeting with any other men for whatsoever reason. This might create feelings of jealousy, anxiety or anger in his mind. However, do not always expect your boyfriend to write to you regularly. There is so much stress on his job that he might not find sufficient time to write to you as often as you write to him. On special occasions, it is a great idea to send him handwritten letters with greeting cards, photographs, gifts or packed homemade food that he likes. There is no better gift for him than eating something you made just for him with all your love.

It is essential for you to be a rock and tender hearted at the same time. Avoid making him anxious over petty personal issues as he has his own set of tensions. Give him the confidence that you are rock solid and independent enough to take care of all the situations while he is away. When you are expecting him to come home, plan a warm homecoming party. Take care to never bid him goodbye with tears. It can make him nervous and steer away his attention from his greater responsibility towards the nation.

It is a rule, that military plans should always be kept secret. Often, it is difficult for your boyfriend to divulge details of his location for security reasons. At such times, it is expected that you should not pester him for any official details.

Military men have a common tendency to use certain abbreviations while referring to their posting zones, their locations, their weapons, their commanding personnel, etc. It is important to understand that these abbreviations form an essential part of normal military life and therefore, these words may be used by your boyfriends during your conversations. Your boyfriend may be more than happy to educate you about this terminology to help you understand his job. If you have a keen interest to learn these words, then you might end up having some really interesting conversations with your boyfriend.

Military men hold a special position in society and there are certain social etiquette to be followed when you have a military boyfriend. Such rules have been set out of respect for the uniform and the dignity it carries. When out in public, avoid making public display of your affections. This also includes hugging, kissing or holding hands in public.

As a military girlfriend, it is quite likely that you will get a chance to meet your boyfriend’s military colleagues. Make sure to address all his colleagues with their military rank and last name. e.g. Capt. Smith or Lt. Dawson. However, when referring to your boyfriend, avoid calling him with his military title. Just address him by his first name or his nickname.

If you happen to be invited to any informal military dinners, then dress up in a sober but sophisticated dress. If there is a particular dress code for the event, then dress up accordingly.

It is generally expected that all partners and spouses of military men should walk on their left side. This enables these men to salute to each other. Do not expect your boyfriend to do anything ‘unmilitary’ for you. e.g. Carrying a girlfriend’s purse would be below the military dignity.

The military rules and etiquette might seem attractive to some of you, while others might consider them to be unnecessary. However, these rules and etiquette have evolved in the American history over the past few centuries. So if you are truly in love with your military boyfriend and dream to be his wife someday, then it is always expected that you gel in with the military environment and achieve perfection.