Things to Talk About With a Guy

When you think of what to talk about with a guy, you'll probably hit a brick wall, and go, 'um'? But there's no need to fret about this anymore, since all the help you need on how to carry on an engaging conversation, will be revealed in this LoveBondings write up.

Home / Uncategorized / Things to Talk About With a Guy 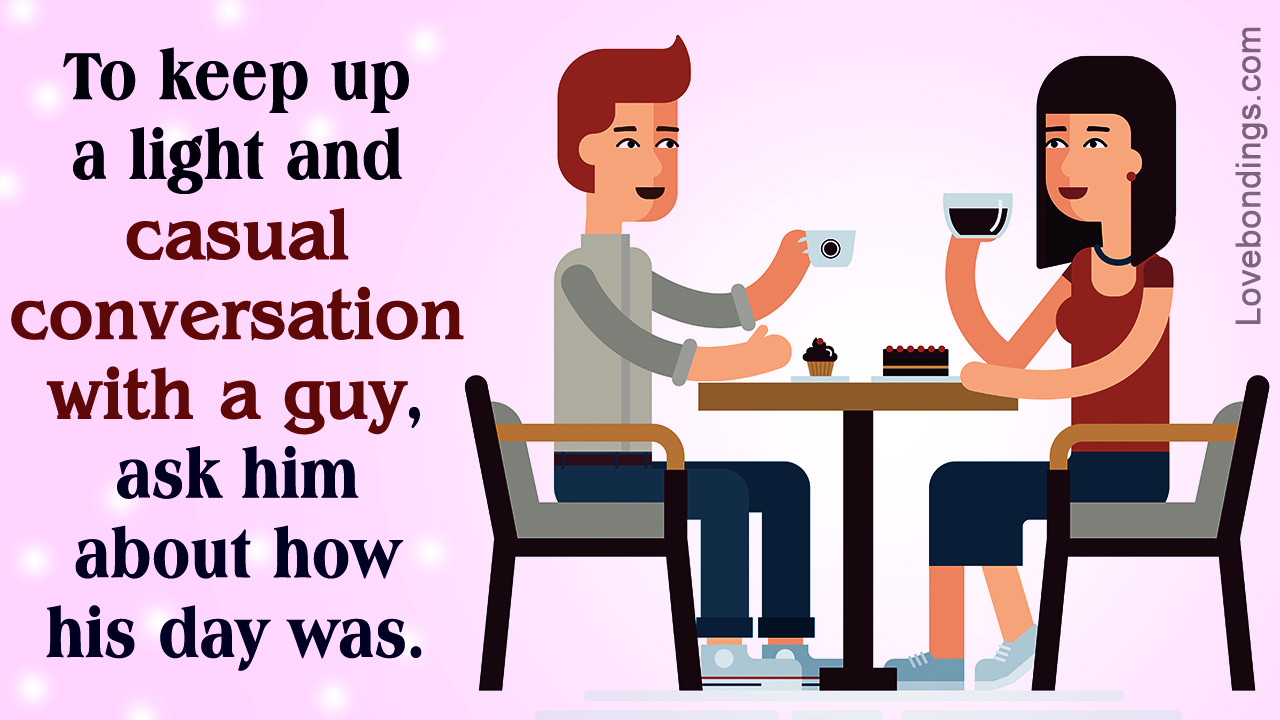 When you think of what to talk about with a guy, you’ll probably hit a brick wall, and go, ‘um’? But there’s no need to fret about this anymore, since all the help you need on how to carry on an engaging conversation, will be revealed in this LoveBondings write up.

Always ask open-ended questions instead of opting for close-ended ones that can be answered with a ‘yes’ or ‘no’. This will prompt your date to talk and open up, thereby increasing your chances of having a great conversation.

So you’re panicking about that first date which is creeping up on you, in what, a day, a week, maybe? And you’re drawing a blank every time you’re thinking about what to talk about with this guy. First off, you need to take a deep breath and give that racing heart a chance to fall back to its normal pace. It’s all butterflies and this hollow feeling in the pit of your chest, that doesn’t seem to go anywhere no matter how much you try to fend it off. Let’s put things in perspective a little, talking to him over the phone for the first time seemed overwhelming, didn’t it? But once you got into it and found your comfort zone, things were just fine… in fact, they were great. So the same thing applies when you’ll meet face to face.

Yes, it does seem a bit unnerving the thought of meeting face to face, but it doesn’t have to be. All you have to do, is be yourself, and talk to him in the same way you would, when over the phone. It doesn’t have to be uncomfortable and awkward, because as the night progresses, you’ll loosen up, and start to enjoy yourself. In this LoveBondings write up, you’ll find some suggestions on how to strike up a conversation with ease, whilst following a flow that will guide you from start to finish on your date.

Topics to Talk About With a Boy

When you think about the things to talk about with a guy on the phone, it makes you realize that it can’t be so hard to talk in the same manner in person as well. Just because we’re separated by distance, and electrical impulses, doesn’t mean that it’ll be any different in person, right? Just remind yourself that this is not a blind date, but someone you’ve been in touch with for some time. Look at it this way, you two have been talking over the phone, and texting each other all day, everyday, and you’ve found that comfort zone apart from each other. This is just an extension of that―a better one.

Talk About the Time Before the Date

To start out on a first date conversation, mention how odd it was to have been in touch (being seemingly long for some reason time wise), and now be seated face to face. One moment you’re wondering when the weekend will come around, and then the other, you’re already on the date. It’ll relax him, and help him share the same thought of looking forward to the date, bringing up how it felt like time was at a standstill, and how the weekend has finally arrived. Some people are open and extremely at ease over the phone, but as the date night approaches, it’s all about palpitating hearts and being constantly distracted throughout the day. It’s bad enough that you have to figure out what to wear, and how to arrange your hair. Take it one step at a time, and the conversation will take its course.

Talk About Things From Here and There

You can talk about general stuff, like how your day was, about the comments people passed about you going on your first date with this guy, or about something new that occurred that day that you still haven’t told him about. Ask him the same questions back, or he’ll automatically just reciprocate the same instances to you. Be yourself, and don’t push him to talk if he seems silent at first. Girls, it’s true, are known to be the quiet ones, but trust me, some guys can shut up like a calm, and seem distant. It is up to you to be the opposite, and open him up to feel like he’s not on trial but on a date.

Talk About Him as the Central Topic

Here’s something interesting to keep in mind the next time you’re talking to someone new―people open up when they are talking about themselves. As simple as that. If, therefore, you find yourselves in a conversation that has more awkward silences than you care for, make this little tip work to your advantage. Find something that you know about the guy, it could be anything, just as far as you can have a decent conversation around it―like, if you ever visited his town, then you can talk about the famous bakery that you visited while there. Or if none of these connects seem to work, then ask him about his job. But please, oh please, don’t word it with a ‘So, tell me about your job’. Steer it as a query or a doubt, like, “I have a friend who works in software, he says it’s rather challenging. Is that your experience as well?” Talking about himself will put him at ease and he will open up much faster.

Don’t hog up all the conversation time, and expect him to sit quietly while you go on and on about yourself and your life. Give this guy some room to pitch in some of his information as well, and have a healthy back and forth conversation, where both of you take turns to say something. Doing this will eliminate boredom from his side, and keep him interested in knowing more, if something were to coincide, or if your opinion came in and vice verse. In this way, you can share both personal and out-of-the-hat topics, that will come to you as the date night lapses.

Talk About Things to Happen

He’ll want to know what you’re up to later in the week or month, and what you’ve got planned for during the holidays or the following weekend. Give him an idea of where you’ll be, and also mention when you’ll be free, and when you won’t. That way he can muster up his courage and ask you out on a second date. Make a mental note of what’s going on in his life, and touch upon these areas during the conversation. It will impress him that you remember all those details, especially when it’s related to family, friends, or work. Don’t impose on the guy about anything that would make him feel out-of-place. Let him guide the conversation, as you throw in the topic.

First dates are never easy to sit through, especially if you’re dealing with someone who will freeze upon meeting. It is your job to make it look effortless, and not so uptight in your case, so that he can unwind and breathe. Don’t limit the conversation to serious topics, but explore other fun things to talk about him. I hope that you have a memorable date, with a lot of great banter in store.