What’s the Difference Between a Nice Guy and a Good Guy?

We often hear people say that the nice guy always finishes last. This is probably true, you know why? That's because the nice guy is never the good guy! What's difference between the two? Find it out here, you could also take a test to figure out what kinda guy you are!

Home / Uncategorized / What’s the Difference Between a Nice Guy and a Good Guy? 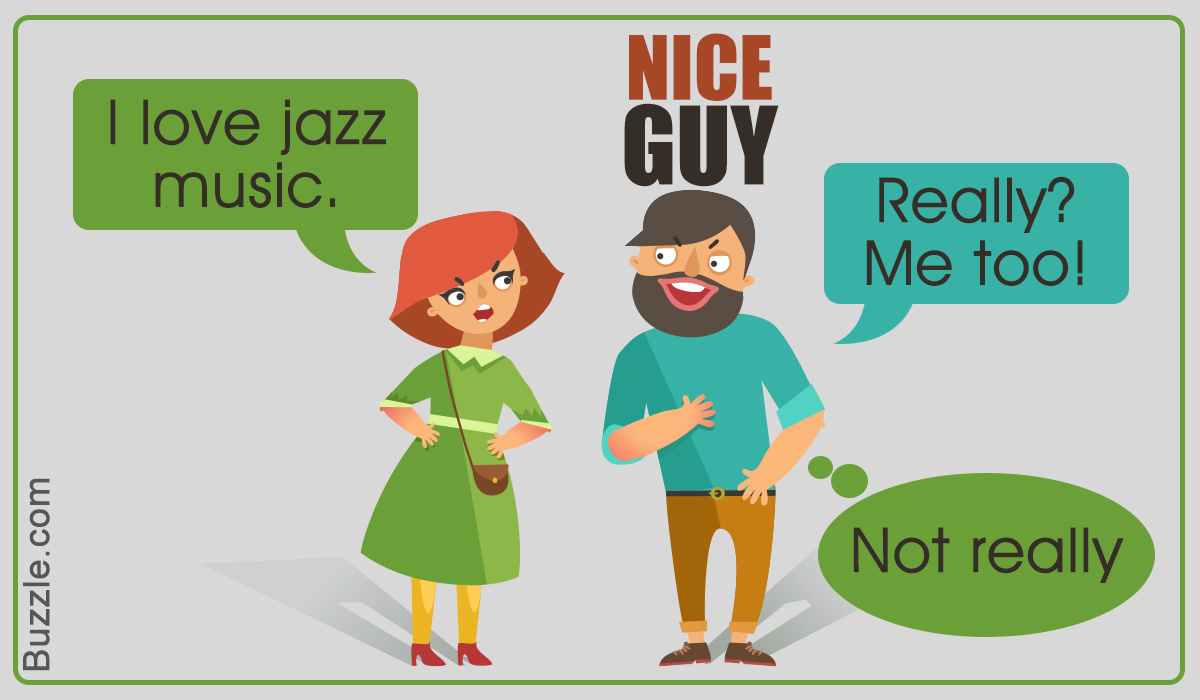 We often hear people say that the nice guy always finishes last. This is probably true, you know why? That’s because the nice guy is never the good guy! What’s difference between the two? Find it out here, you could also take a test to figure out what kinda guy you are!

How to be a Good Guy

Work for a Cause, Not Applause;
Live Life to Express, Not Impress
Don’t Strive to Make Your Presence Noticed, Just Make Your Absence Felt. ― Anonymous

If we ever had a nickel for every time a guy friend has said, “Girls don’t like nice guys like us” or “no one wants to date me because I’m too nice” we’d definitely have a mansion of our own. We’ve got some news for you boys, we do not like nice guys, rather we’d go for guys who seem to be good.

What’s the difference you say? Well, here are some points for you to ponder upon.

❝Usually it’s the nice guy who keeps everything bottled up inside, even if it bothers him. He tends to agree with everything his potential interest is saying, just to make her feel that he is the “one” or avoid rejection.❞

Our Take: Unfortunately dear boys, this is a red flag for girls. They either think you’re a phony, which at this point you are, or that you have no persona. In any case, you’re out of the picture.

Be the Good Guy: Tell her what your opinions are in polite words. The fact that you disagree with her doesn’t really offend women, as long as you’re not being rude about it. There’s no way you could start something meaningful if you don’t really be yourself.

❝The nice guy thinks it’s his duty to save her and comfort her, and most of the time, he expects something in return. He may not say it but he’s thinking about it.❞

Our Take: Girls are much stronger than you expect them to be. We can fight our own battles, and we expect you to respect that. If we need help, we’ll ask for it and no, you’re not doing us a favor.

Be the Good Guy: Don’t walk in and try to wasp everything. She’s got some figuring out to do, give her the space she needs and support her. Do not expect anything in return, you’re a man not a commodity respect that and we’ll respect you.

❝The nice guy always fails to find faults in himself; on the contrary, he’s not shy of pointing out everything that is wrong with her once he’s accomplished or realizes he’ll never get what he wants. They usually have something nasty to say about their exes, even if they don’t say it, that is what they’re thinking.❞

Our Take: Nobody likes an arrogant prick. For those who think they could get what they want by merely accepting that they were wrong; think again.

Be the Good Guy: Just like everyone else, you’re not perfect. Accept it and work towards improving yourself―you’ll make your life much better. Respect is a two-way street; respect her and she will respect you.

❝The nice guy is somehow assured that he’s a nice person and never fails to point that out time and again. On some instances, he even manages to victimize himself to her atrocities or the heinousness of the world.❞

Our Take: A self-proclaimed good guy assures a girl that this is all a facade, and it’s a cue for the girl to make a quick exit. They think you’re a douche and write you off almost immediately.

Be the Good Guy: Genuinely try to do some thing good for others without expecting anything else in return. Leave the praises to others rather than holding a halo on your head. When you’re a genuinely good person, it shows.

❝The nice guy hates being friend-zoned and kinda resents the girl for not liking him back. Sometimes, this manifests a lot of harsh words on the girl’s character.❞

Our Take: Girls know what it is like to be friend-zoned as well. Forcing your feelings on them is never going to help; on the contrary, it may just invite some jail time or a restraining order. When it comes down to writing profanity about a girl, nope, that isn’t going to help you either, not with her or any other girl.

Be the Good Guy: As much as we all hate being friend-zoned, grow up, you can’t hold her accountable for it. Learn to understand that it is just a case of mismatched feelings. There’s nothing else that can be done in situations like these.

If you’re still confused whether you’re a good guy or a nice one, here is a quiz to find out; girlfriends you could take this test if you know your guy really well to find out if you have got yourselves a keeper.

Are You a Nice Guy or a Good Guy?